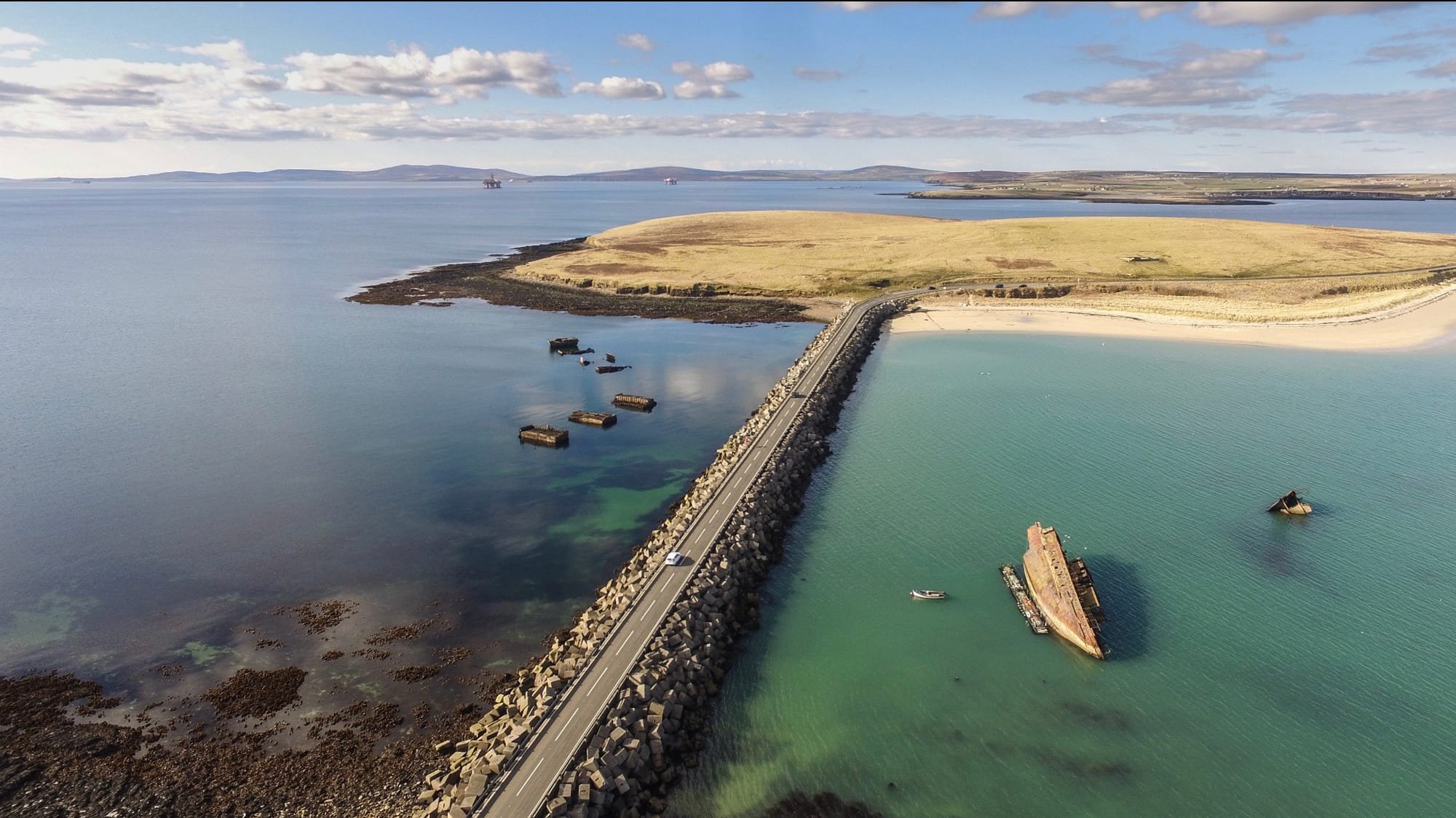 From the start of World War II the Home Fleet was based in Scapa Flow, just as it had been in World War I. Scapa Flow is a large body of water in the Orkney Islands, 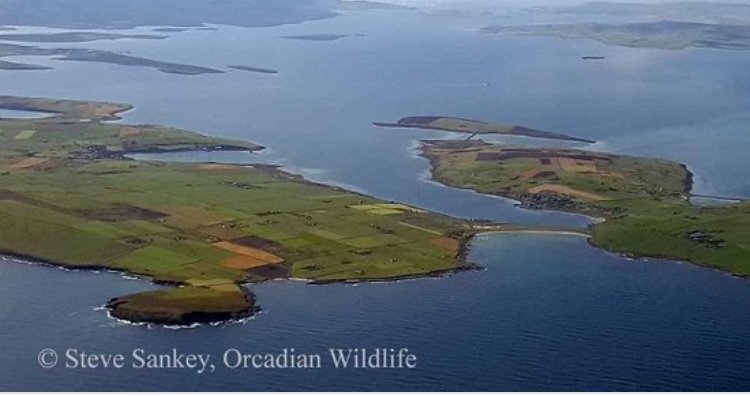 sheltered by the islands of Mainland, Graemsay, Burray, South Ronaldsay and Hoy. Covering 140 square miles, this water forms a natural harbour, but the channels lying between the small islands to the east were seen as a potential threat, as they left the anchorage open to attack. 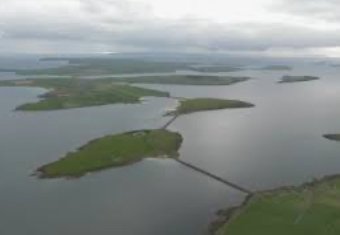 To counter this threat, blockships were sunk in the channels to render them unusable. 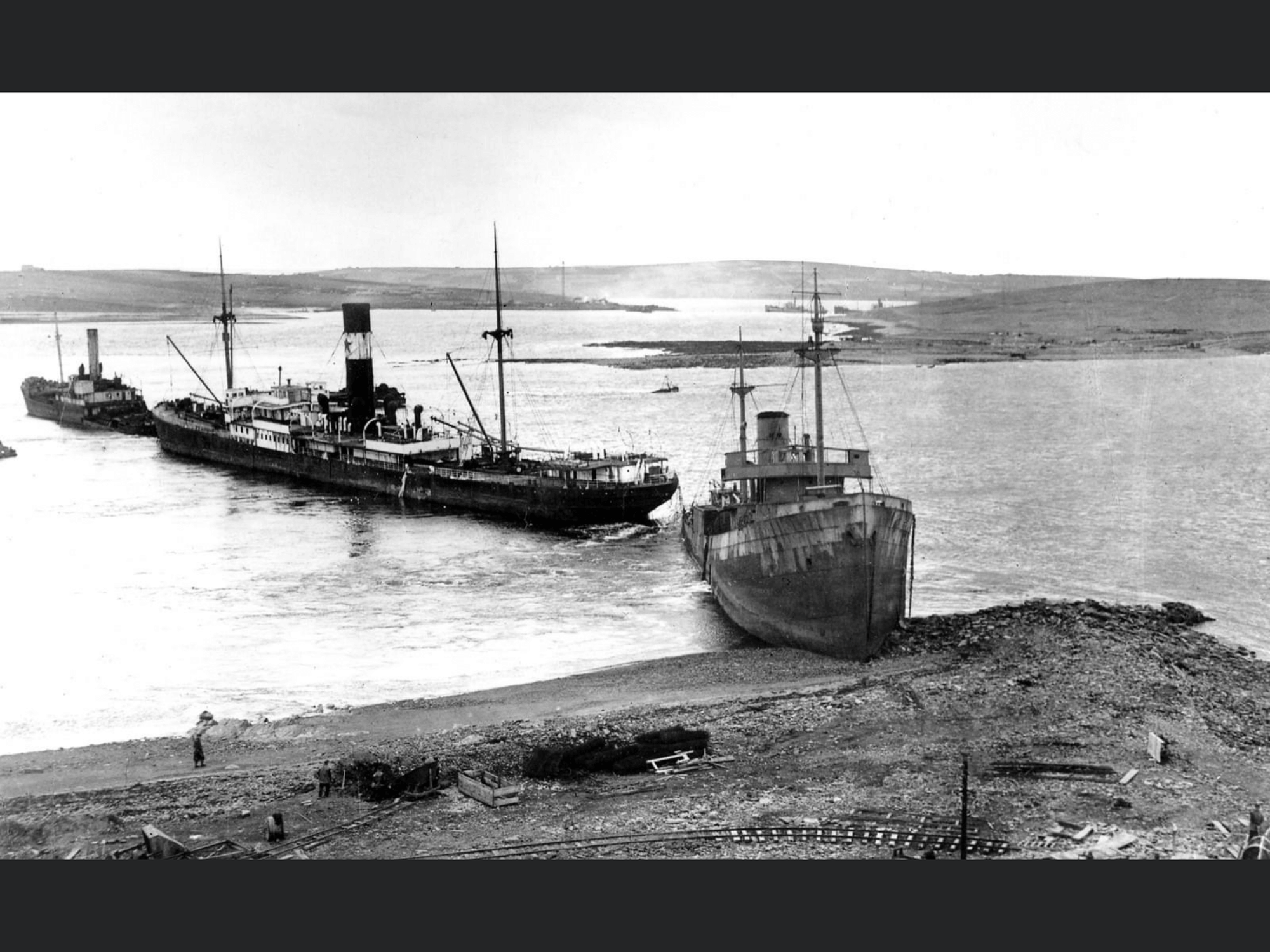 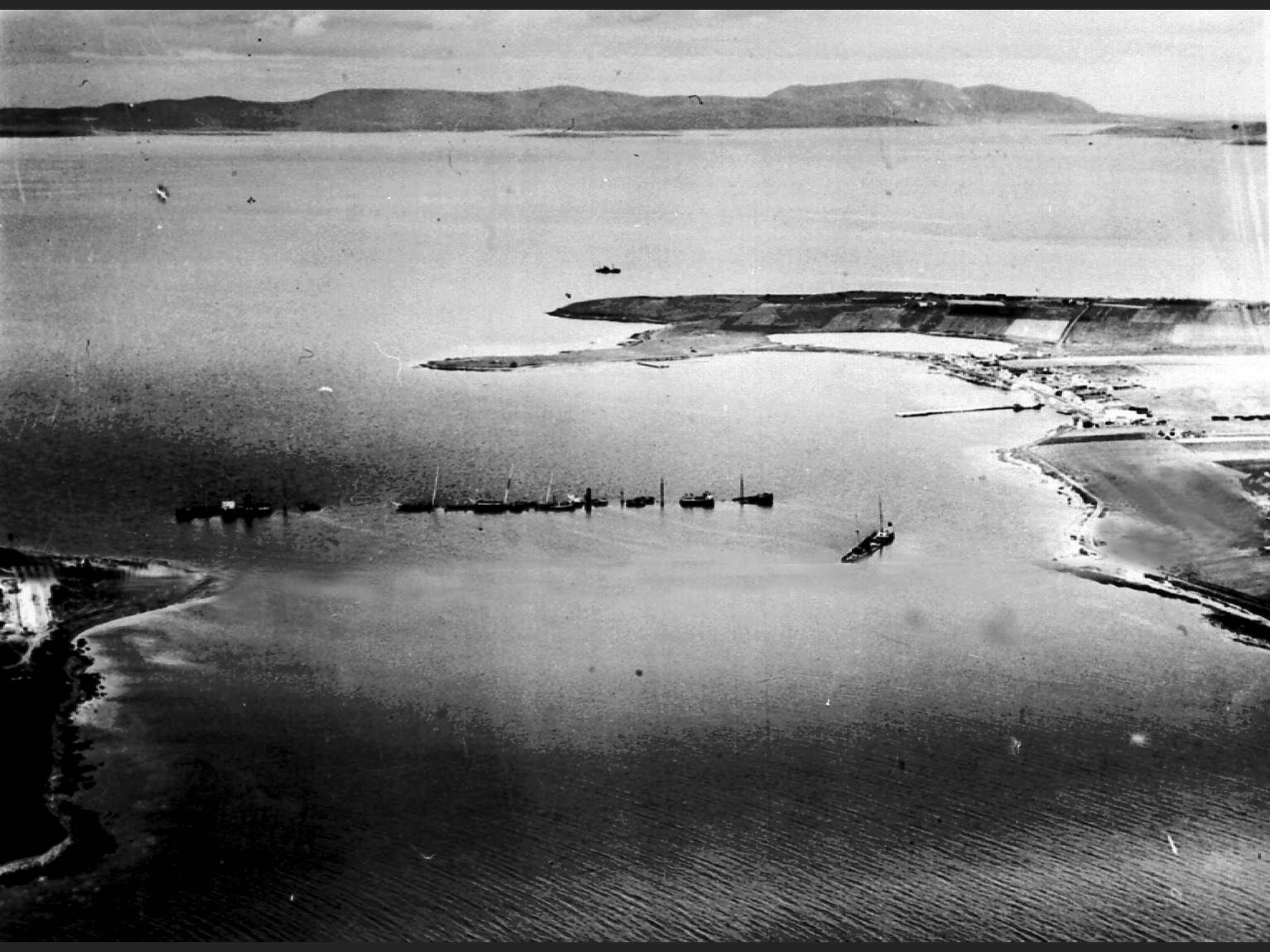 Unfortunately, the deployment of the blockships was to prove less effective than planned, and on October 14, 1939, Günther Prien took advantage of an extremely high tide and arrived at Kirk Sound where he successfully navigated U-47 past the blockships placed between Mainland and Lamb Holm (later closed by barrier No 1) and entered Scapa Flow. Undetected, he was able to carry out two attack runs, and of seven torpedoes launched, three struck HMS Royal Oak which sank within 15 minutes. The attack came as such a surprise that all attention was initially focussed on the air, as no-one believed submarine attack possible. This confusion provided Prien the time needed to make his escape through the same channel he had arrived through, albeit by a different route as the tide had ebbed and closed his original path. The Royal Oak had a complement of 1,208 officers and men, 833 were lost, with 375 survivors, the largest loss of life in home water of World War II, followed by HMS Dasher. The result could have been much more extreme, although Prien's intelligence had correctly identified the ships in Scapa Flow, much of the home fleet had departed the previous night, bound for the Norwegian coast. Among them the battle cruisers Hood and Repulse, the battleships Nelson and Rodney, and the aircraft carrier Furious. The impact of Prien's attack can only be imagined had he arrived a few days earlier, or if the ships had sailed later. 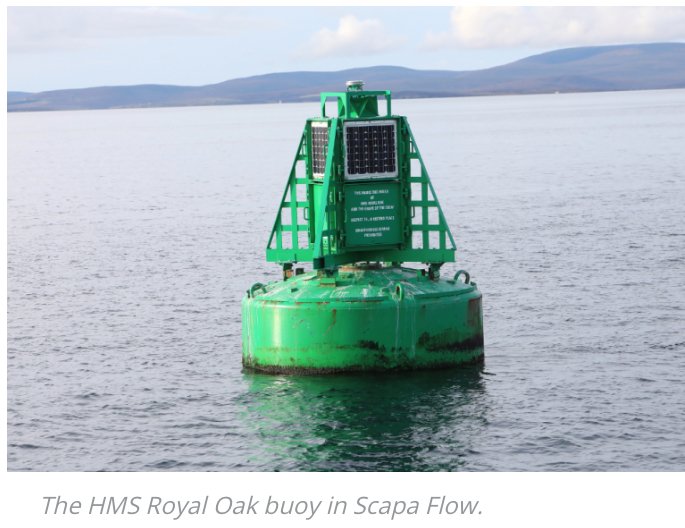 Churchill visited the area soon after the tragedy and immediately ordered the construction of causeways to block the channels permanently. Four barriers would be built: the first from Mainland to Lamb Holm; the second from Lamb Holm to Glimps Holm; the third from Glimps Holm to Burray; and the fourth from Burray to South Ronaldsay.

The causeways were constructed using gabions, wire cages filled with rocks, which were dropped into the channel and then topped with large concrete blocks. Some 40,000 cubic metres of rock were deposited in the water, which could be anything up to 70 feet in depth, using overhead cableways known as blondins. This was then topped by 300,000 tonnes of concrete blocks, which forms the routes visible today. Rock was quarried locally on Orkney, while the concrete blocks were cast on the islands. The project was huge, and involved the construction of a railway to transport the stone and concrete to the construction area, the overhead cableways, piers on the islands, and power stations to provide electricity. 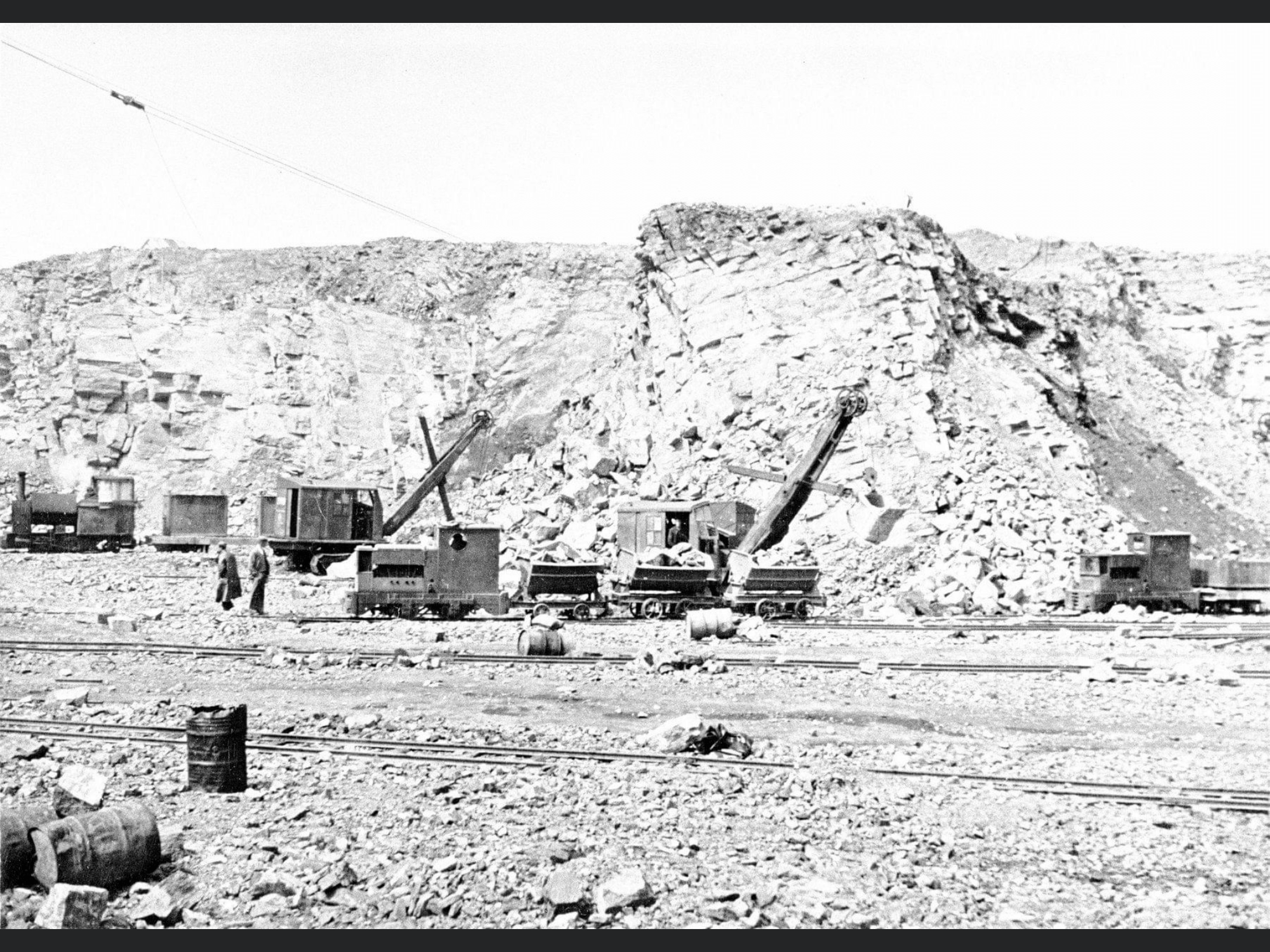 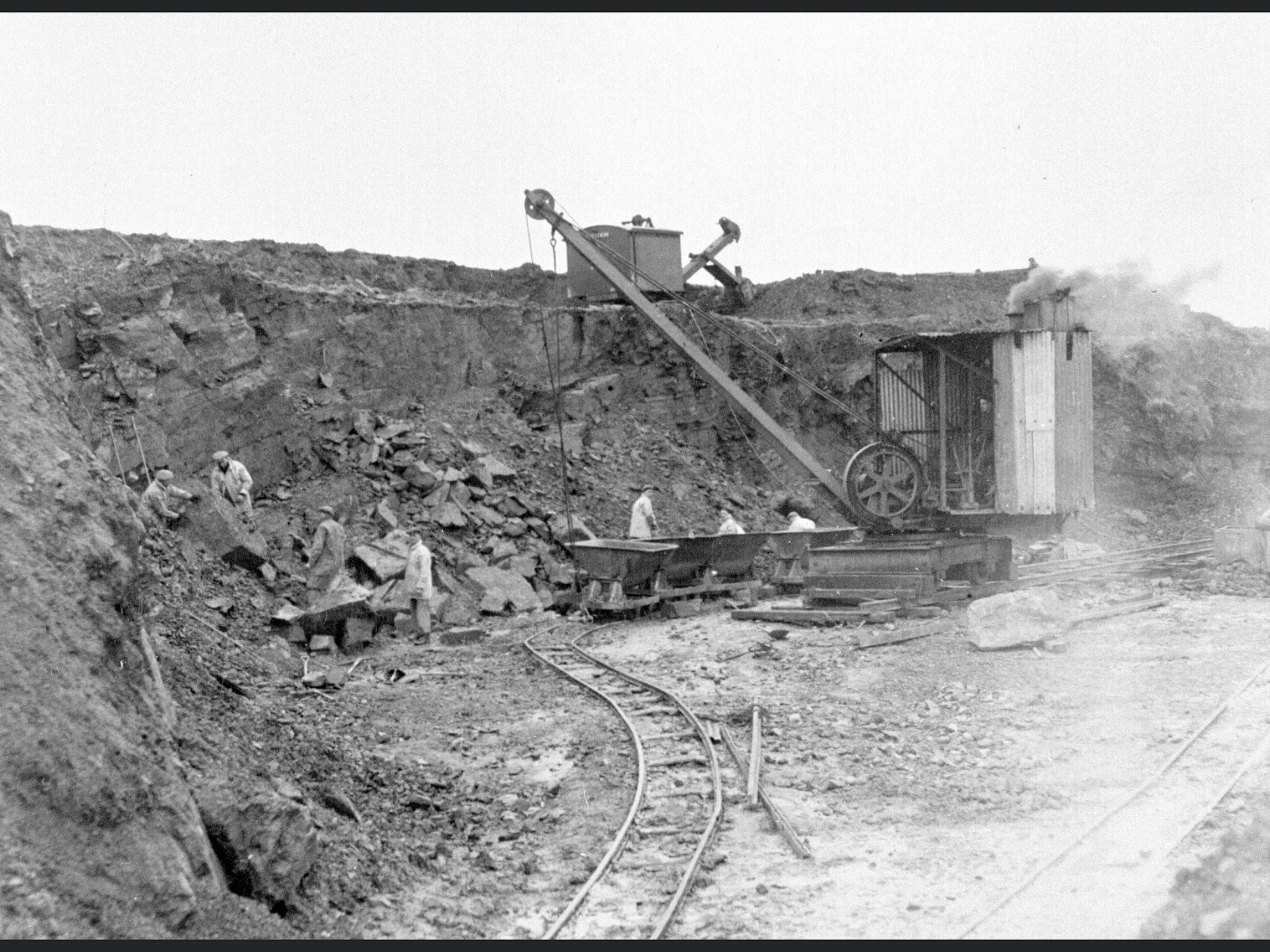 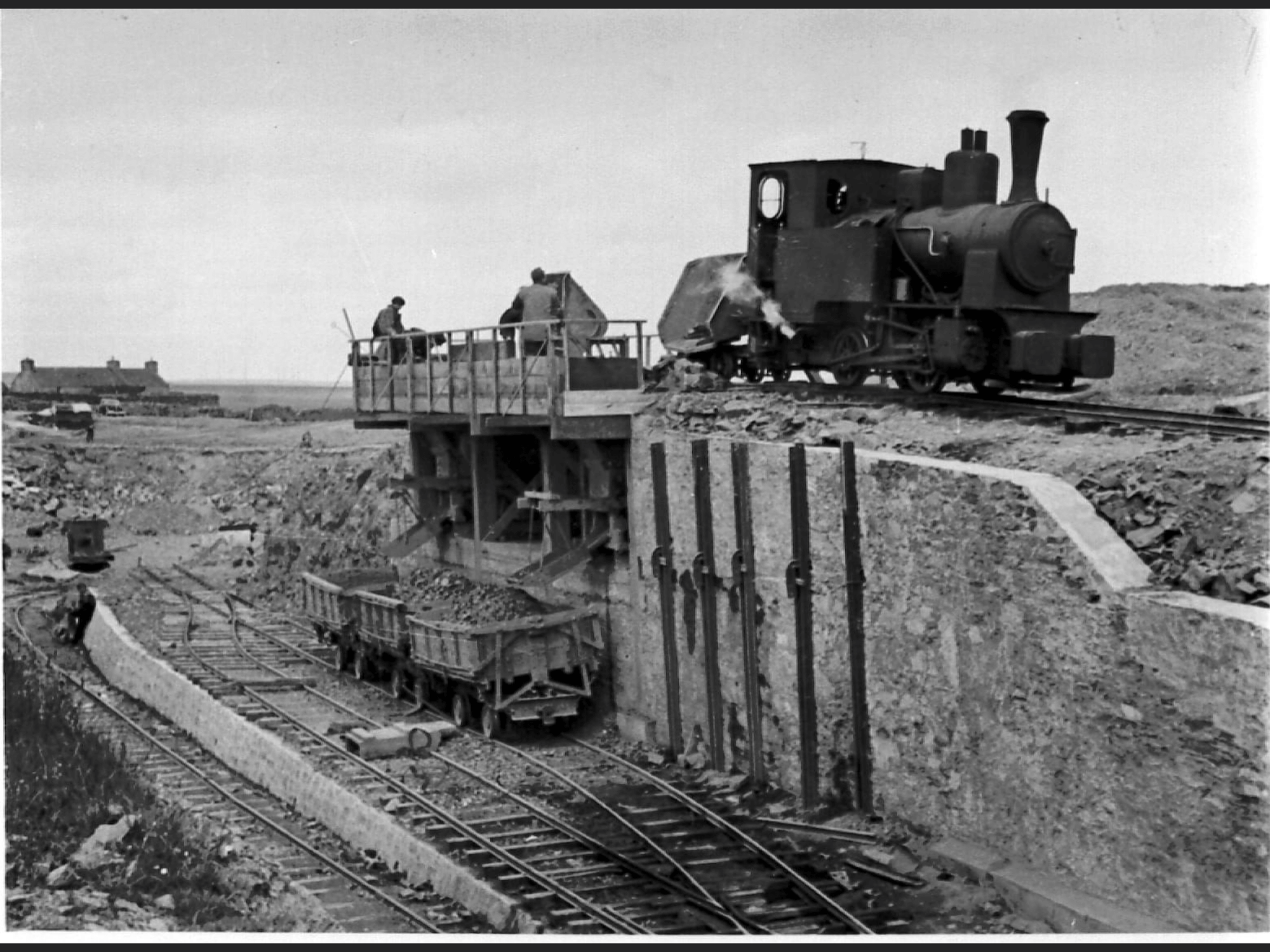 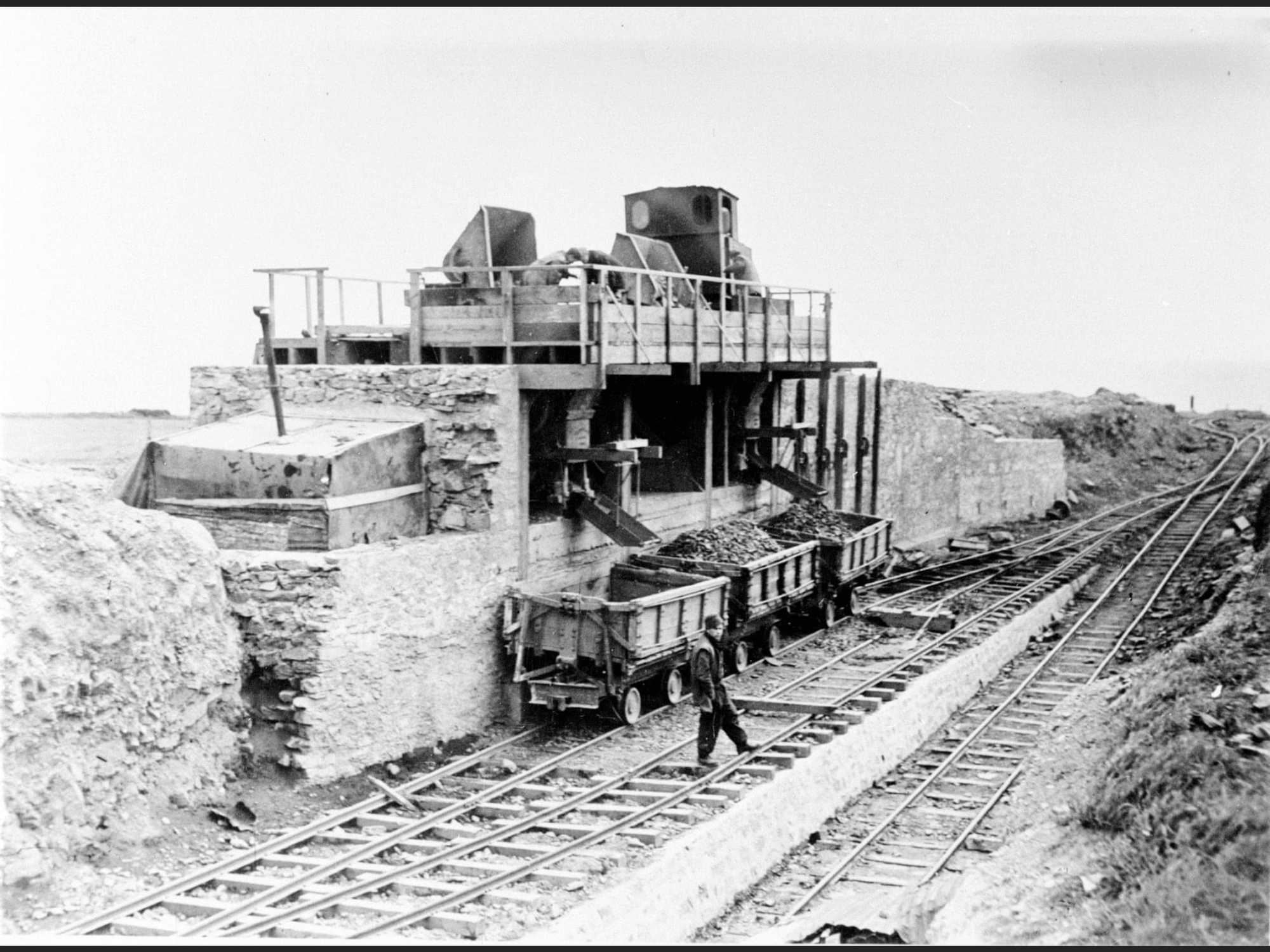 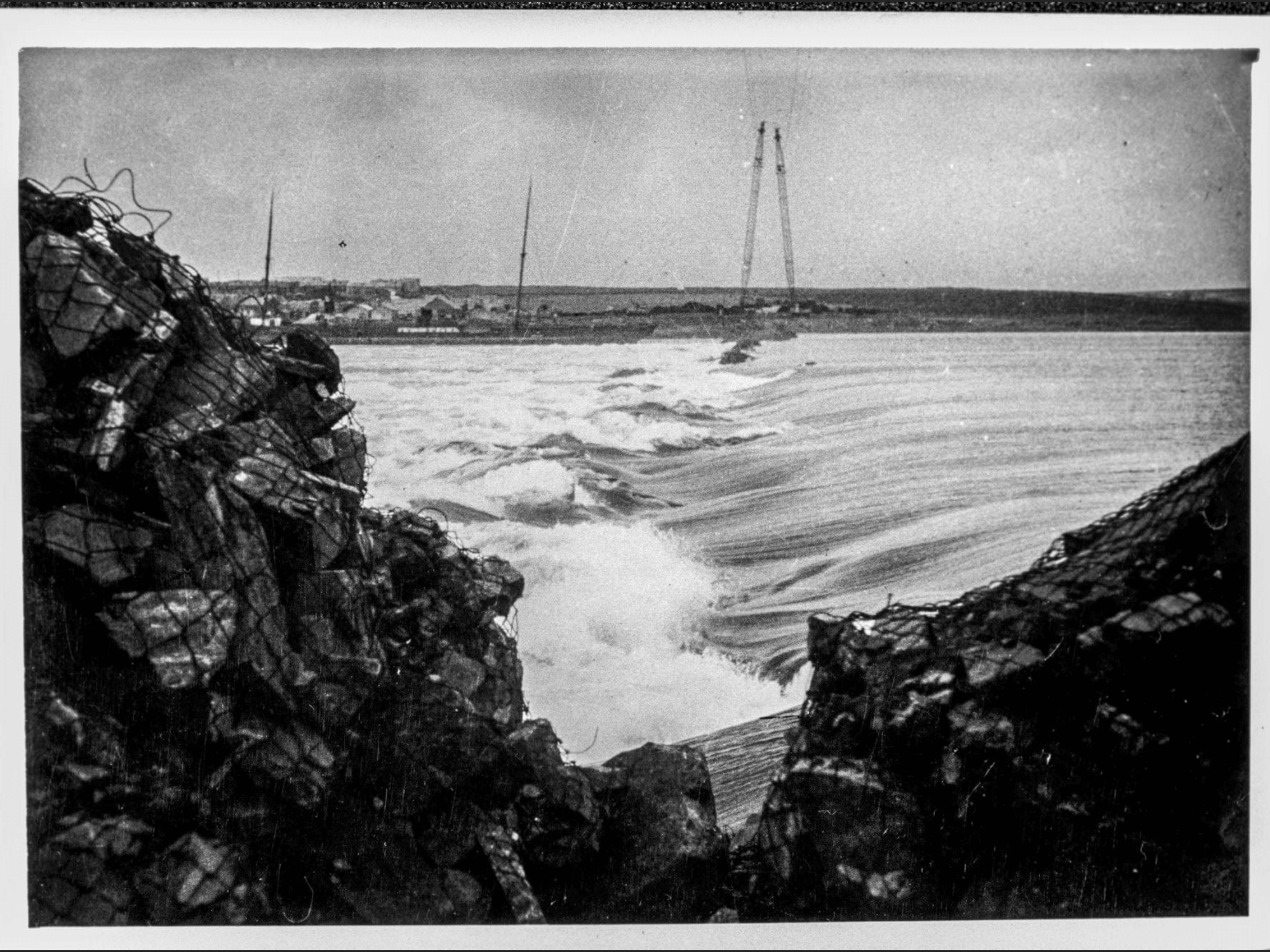 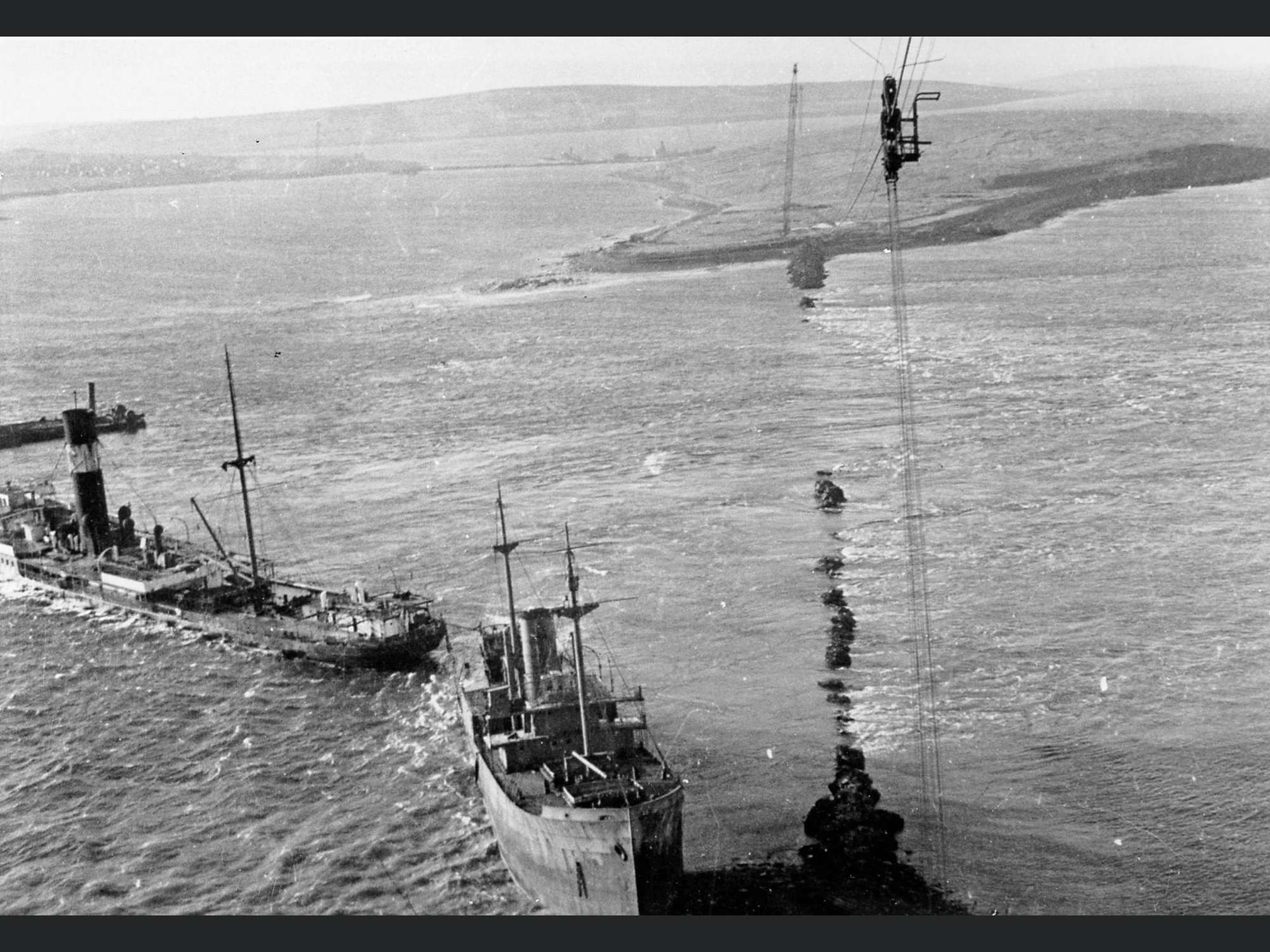 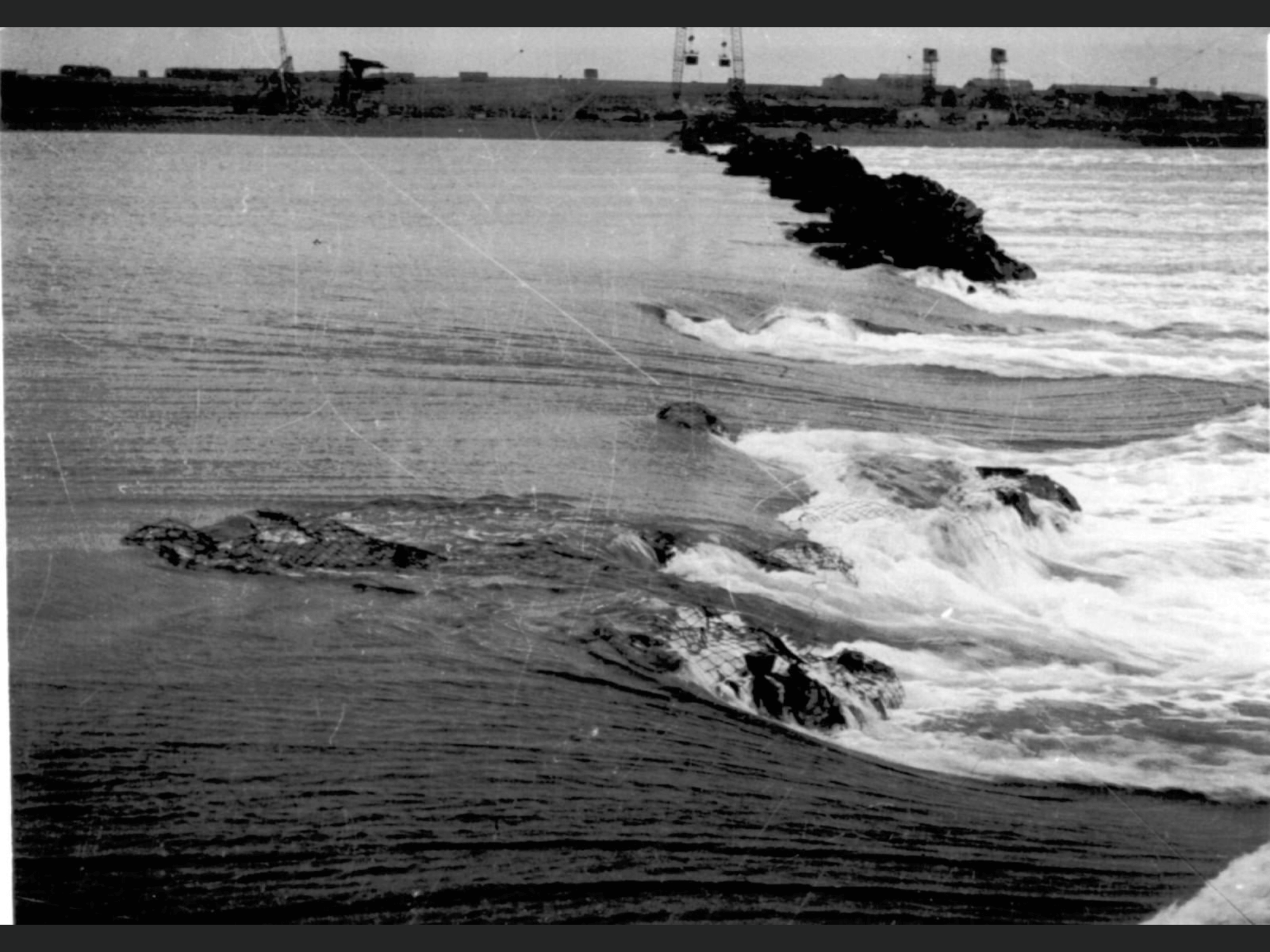 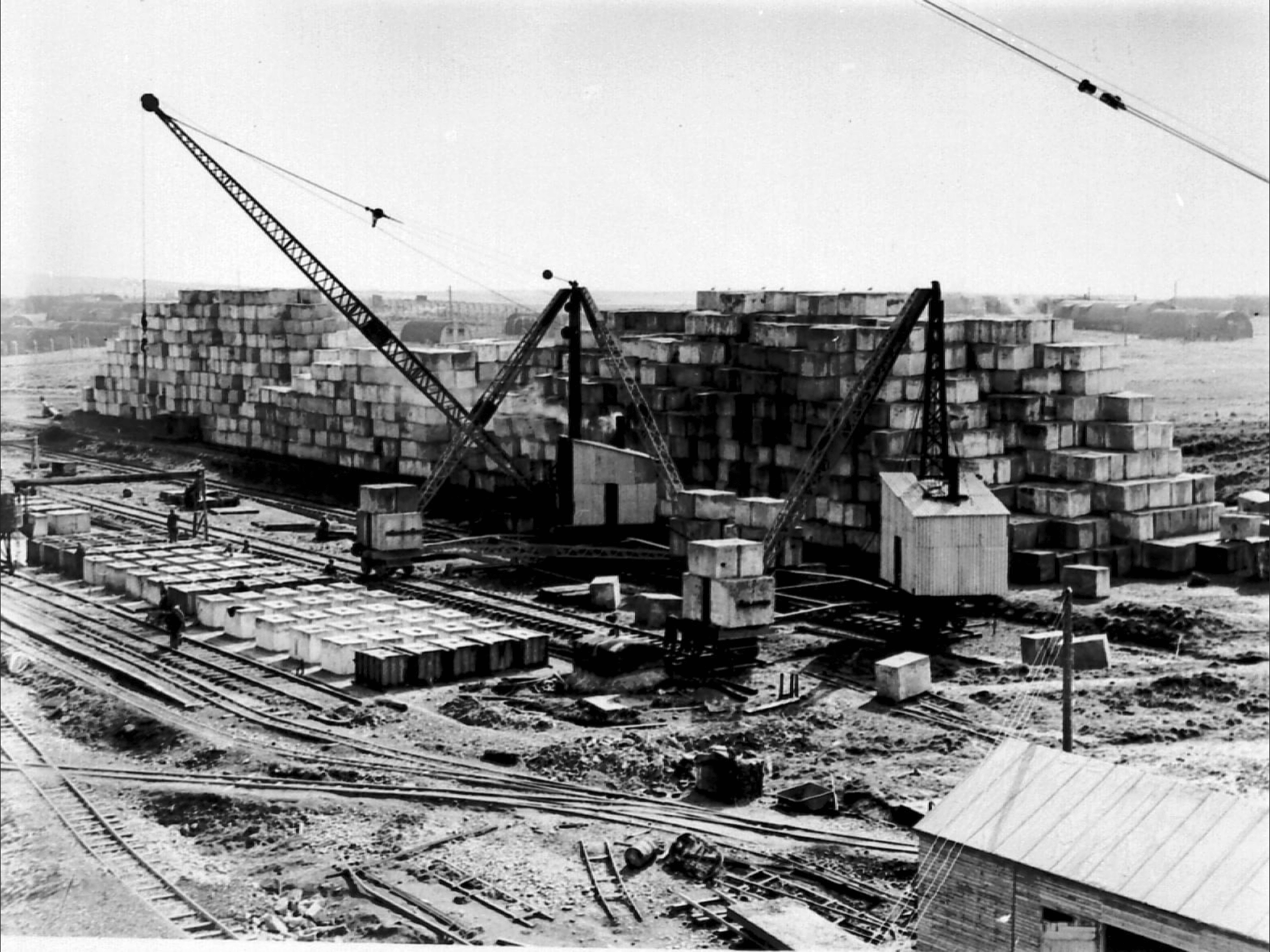 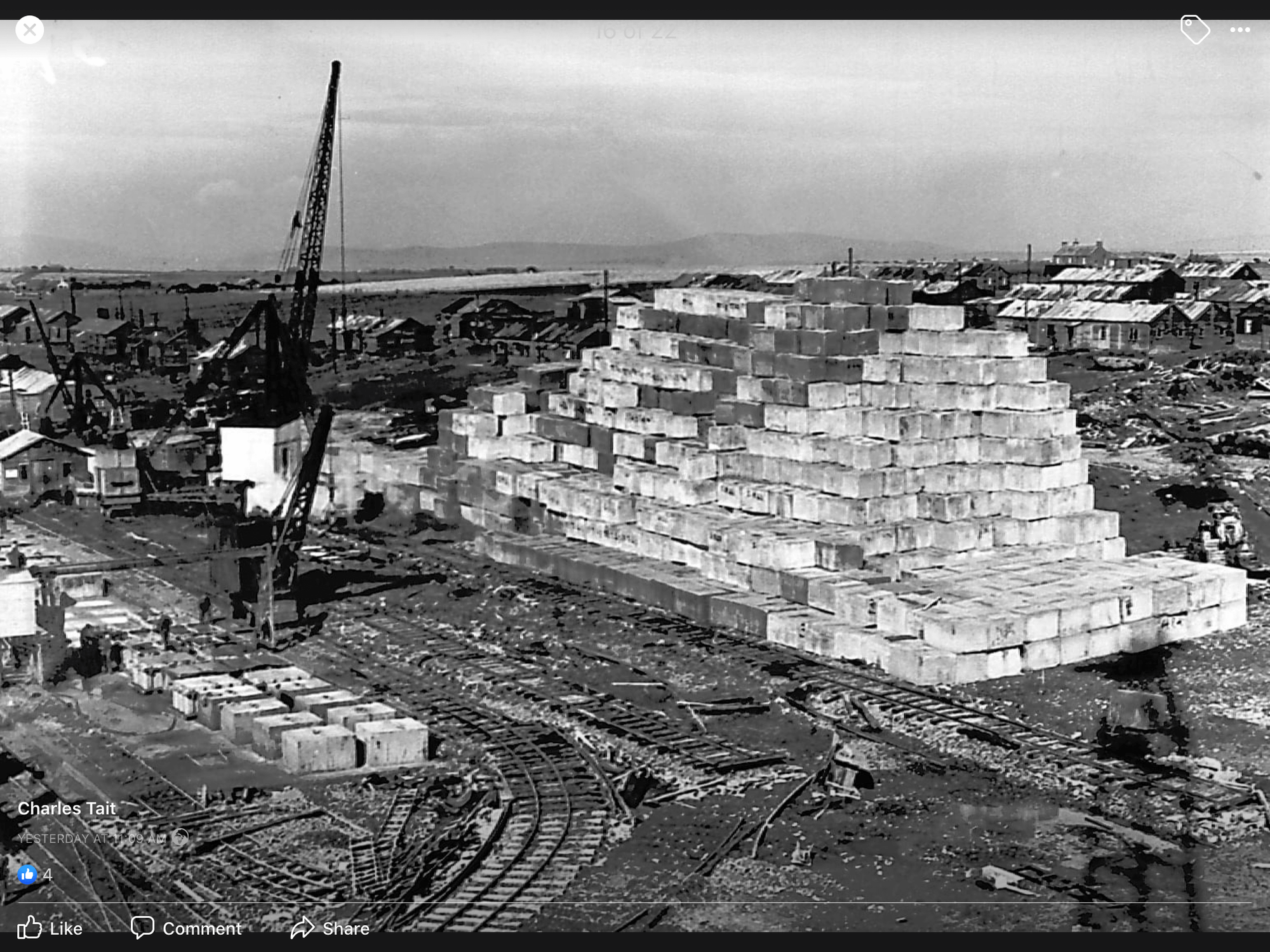 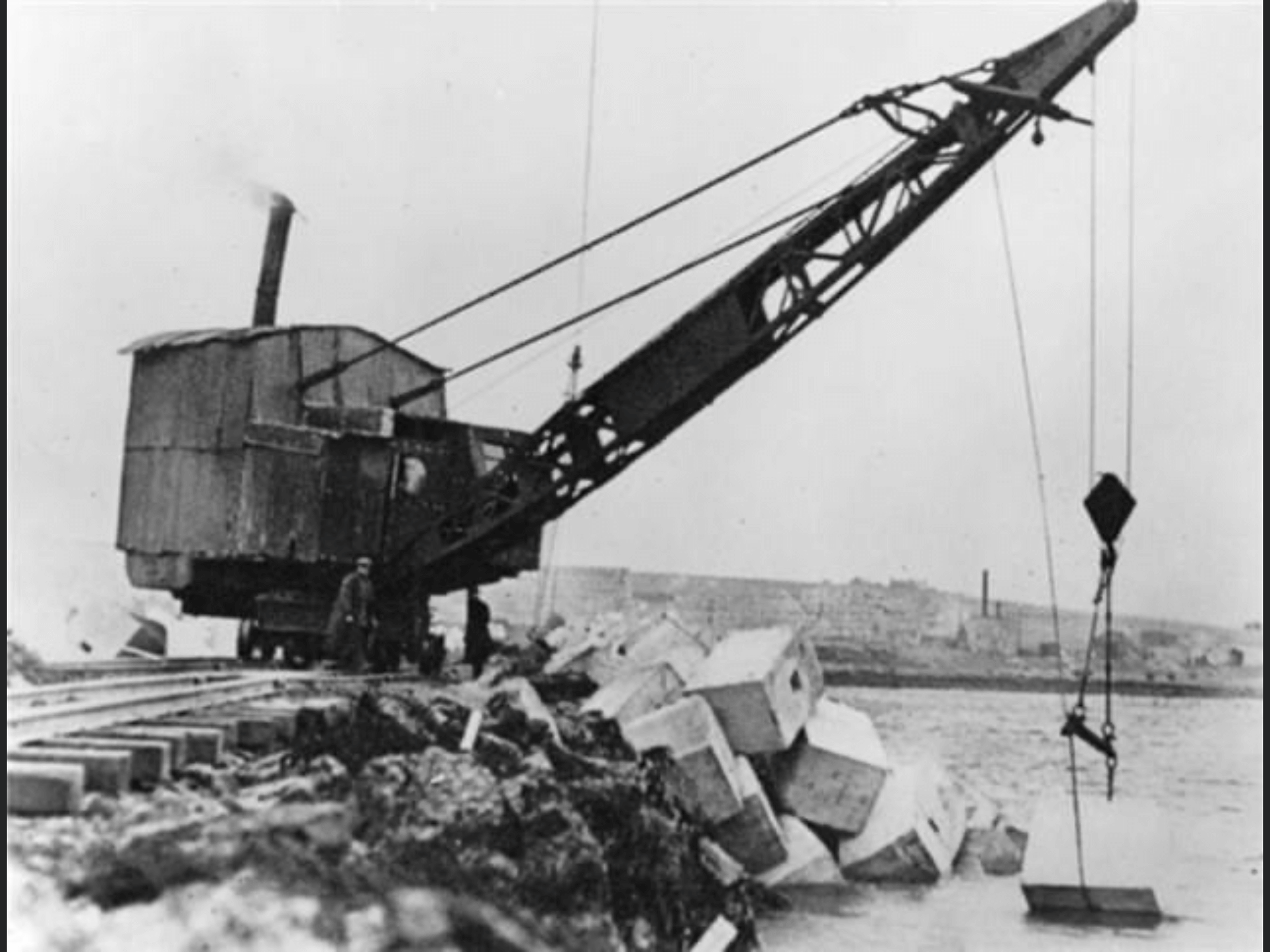 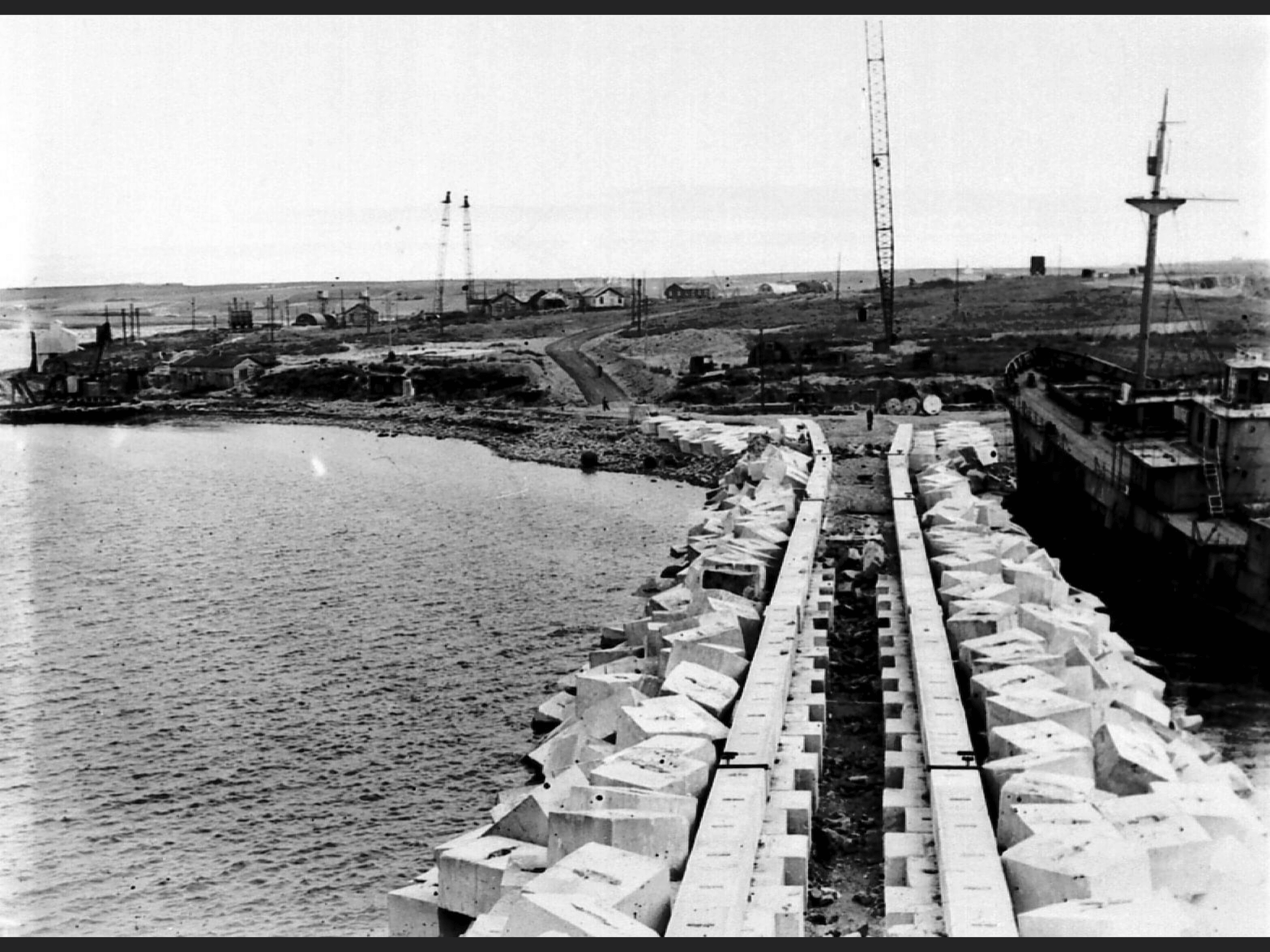 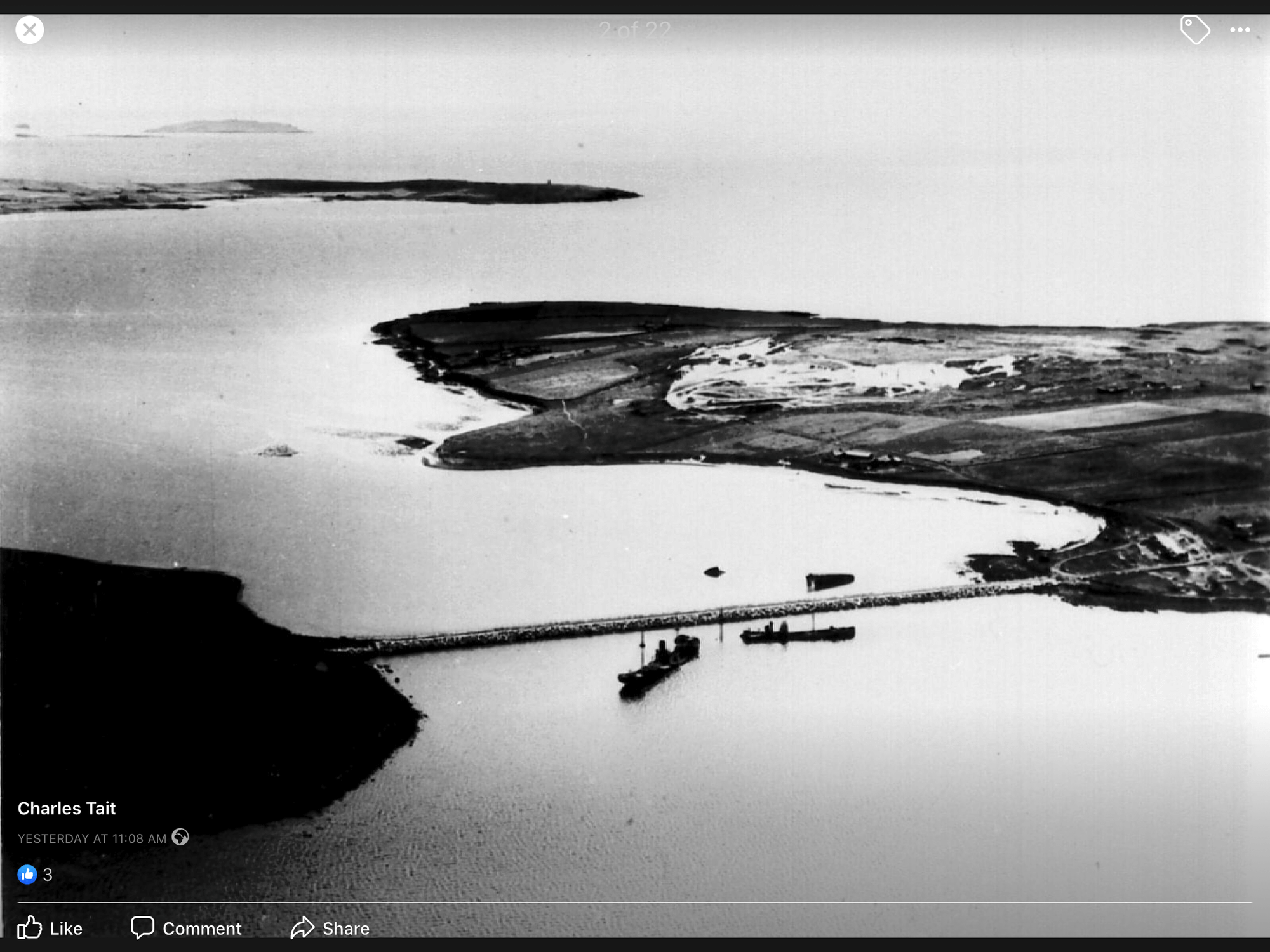 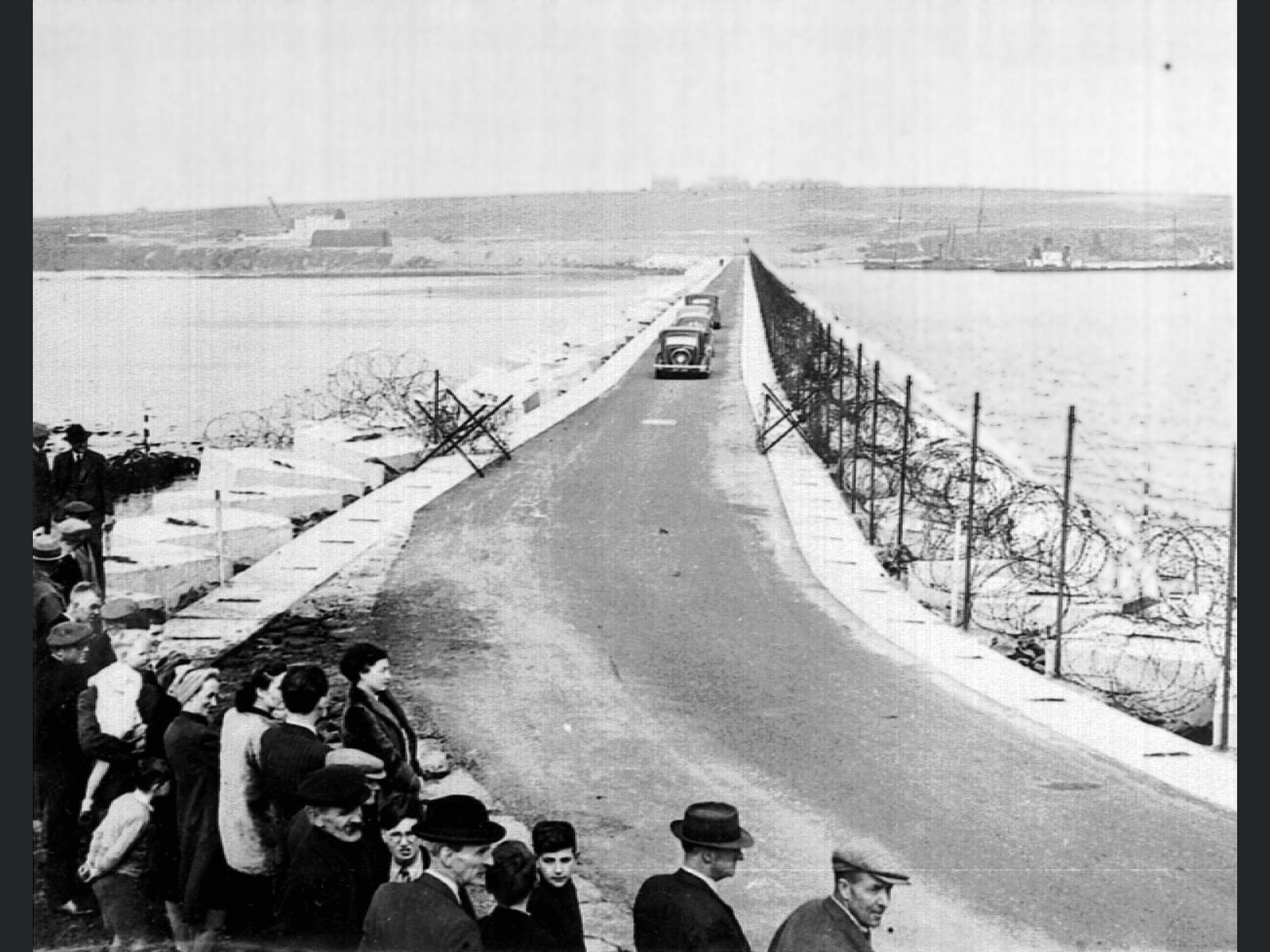 Construction of the barriers began in 1940, and was not completed until 1944, and they were not officially opened until May 12, 1945, four days after VE Day signified the end of war in Europe. The work was undertaken by civil engineering contractor Balfour Beatty, and much of the labour was provided by Italian PoWs (Prisoners of War) who had been interned in two local camps, Camp 34 on Burray, and Camp 60 on Lamb Holm. When they first learned of the work, and the camp leaders claimed the work was warlike, and that the PoWs were being put in danger by being located near the home fleet base. The leaders of both camps demanded that the prisoners be moved to a safe site where no warlike work was to be carried out. The authorities refused, both camps went on strike, and were consequently placed on a 14 day punishment diet of bread and water, with normal rations every four days. A new commander was assigned to the camps, a British major who could speak Italian. Able to communicate properly with the PoWs, he gained their trust and arranged meetings with the town's provost (mayor) to discuss the work. Such work would have been illegal under the Geneva Convention but for the fact that the barriers all carried roads between the islands, and using PoWs for projects which benefitted the local community was exempted under the Convention. The PoWs agreed that they would be building causeways linking the islands to the benefit of the local communities, and work resumed. The troublemakers who had initiated the strike were identified, and removed to other camps.

Lamb Holm is also the site of the Italian Chapel. 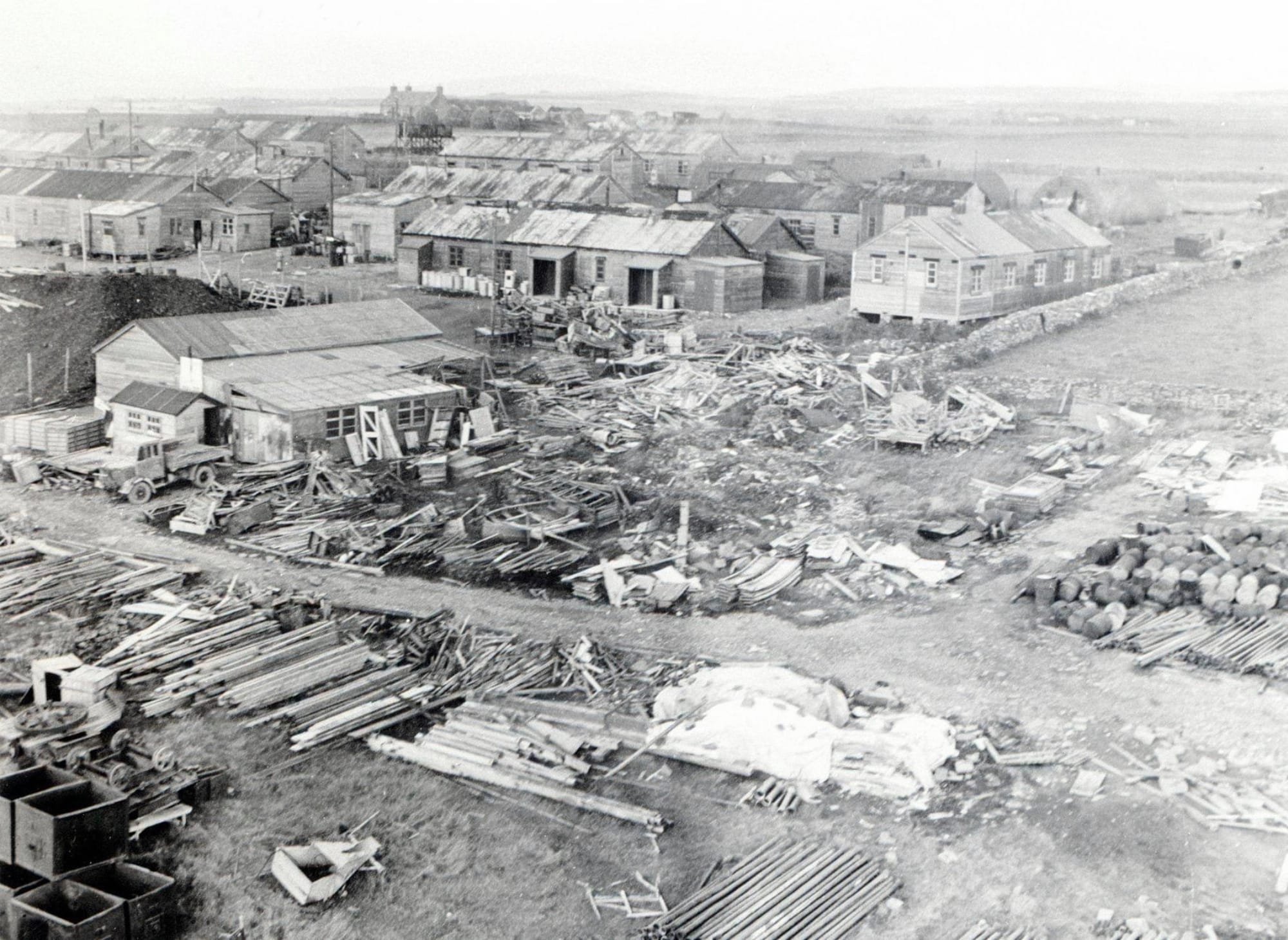 The three most northerly barriers still look much as they did when they were built, although the roads that pass over them have been upgraded over the years. The fourth barrier and the shores of the islands it connects have grown an accumulation of sand, giving the islands the appearance of being closer than they really are.

The blockships remain in the channels near the causeways, and have become a local attraction, bringing divers and tourists to the area. 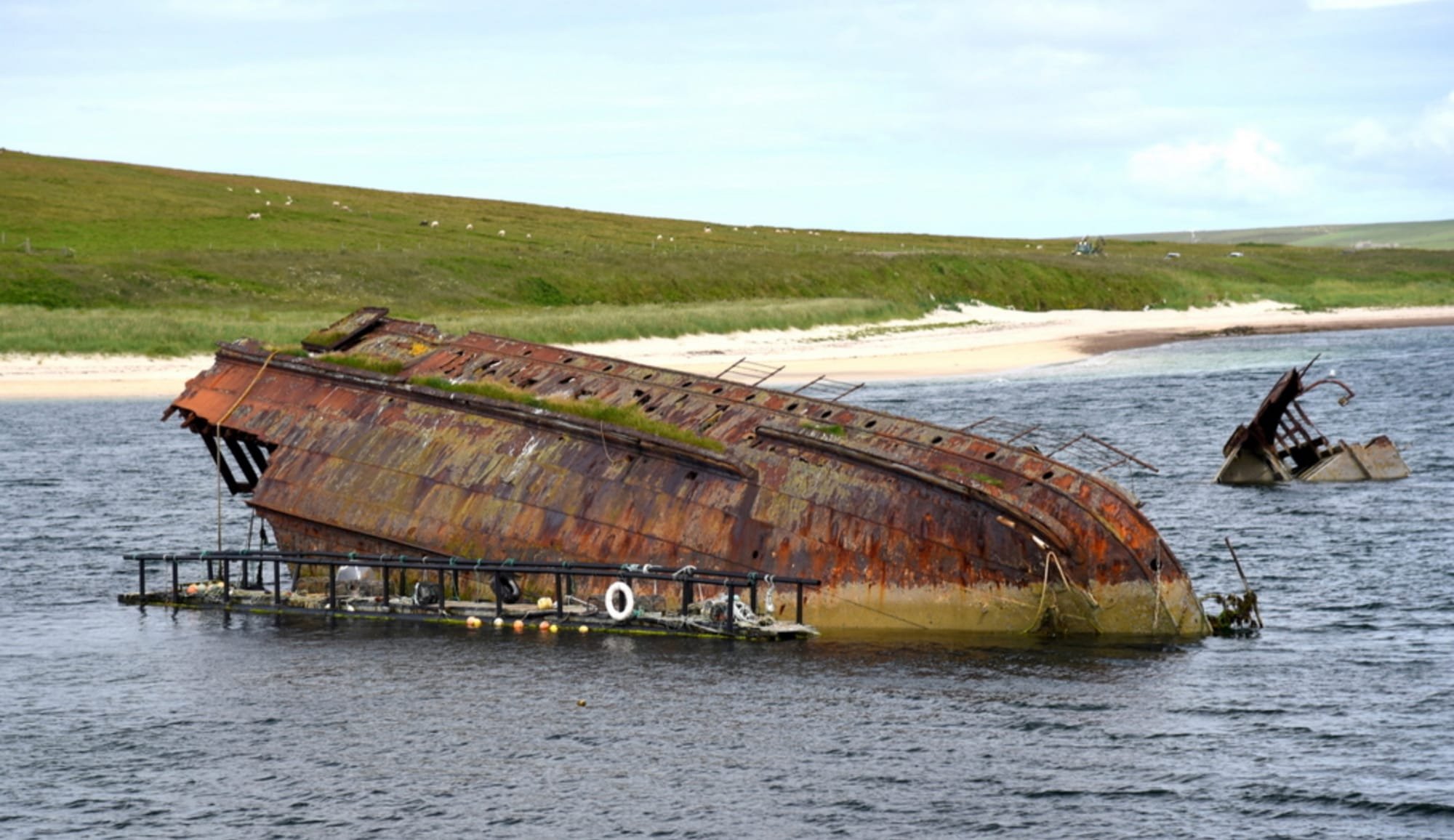 In November 2011, it was reported that Orkney Islands Council purchased the barriers from the MoD for a nominal sum, giving it ownership of the seabed below the causeway, and addressing what it referred to as an 'anomaly' in the island's road network ownership.

At the same time, it was also reported that talks had been held with a renewable energy developer.